Christopher Wright, director of the Vanderbilt University Program in Developmental Biology, is the recipient of this year’s Society for Developmental Biology Viktor Hamburger Outstanding Educator Prize for his outstanding contributions to the field of developmental biology and his commitment to mentoring, advocacy, and education. Wright received his Doctor of Philosophy in Biochemistry in 1984 at the University of Oxford and completed his postdoctoral research on homeobox genes with Eddy De Robertis at the Biozentrum of the University of Basel and the University of California, Los Angeles. He was highly productive as a postdoctoral fellow and published over 20 papers. Wright said that the timing was “quite serendipitous” and that he was in the right place at the right time.

In 1990, he became a faculty member at Vanderbilt University, where he designed and currently directs a highly successful T32 Training Program in Stem Cell and Regenerative Developmental Biology funded by the Eunice Kennedy Shriver National Institute of Child Health and Human Development (NICHD). In letters of support, his peers refer to it as the “gold standard” due to its immense track record of accomplishments as well as its high intake of underrepresented minority trainees. The program has been continuously funded for the last 26 years and is currently funded through April 2023.

Wright anticipates the grant will be funded again to provide at least another five years of funding but is also planning new leadership for the program. He said, “We have a succession plan because I cannot continue to do this for the rest of my life, right? It is good to pass it over to more junior people. I can act as a kind of facilitator for the transfer process.”

Over the years, Wright has published over 200 papers and is known for his work in left/right asymmetry, Nodal signaling, and pancreas/islet cell development. Although his lab continues to be highly productive, Wright notes that he feels a shift in responsibility from research to education and advocacy.

“There’s a sort of realization as you get more senior that biology, not just biology, but science, the results, the models, the discoveries, they … by nature, get buried by the tsunami of stuff that comes afterward,” said Wright. “You’ve heard people talk about things getting discovered and rediscovered in a different name and then rediscovered again under a different name … I, kind of, am ambivalent towards where we’re going in the future.”

He further explained, “You realize that no matter how great your discoveries might have been as part of the [slew] of things left behind … you may as well just make people better scientists and help them to think in a scholarly fashion and not forget real, probing questions.”

Wright has mentored numerous trainees at all levels, both formally and informally, and his enthusiasm for science is palpable. In letters of support, his colleagues and trainees emphasize that Wright made them feel valued, engaged, and supported, while also challenging them to think creatively. Wright noted that a significant part of his philosophy is teaching the next generation of scientists how to think and focusing on “self-efficacy, self-elevation, and self-advocacy.“

“I expect people who train with me … to be very enthusiastic about learning and enthusiastic about discoveries [at all levels]. I have high expectations for their own desire to not only do the experiment, but to understand what they’re doing, what the molecules are doing … what the embryo is trying to do,” Wright said. “They should also be thinking laterally quite a bit of the time about connections to other systems.”

Wright’s most influential mentor was Brigid Hogan with whom he designed the T32 grant. “It is one that I regard as a two-way mentorship thing. … She was always my advocate and always half a generation ahead of me,” Wright said. “For example, without it needing to be me, within a year, she and I had written three Nature News & Views articles on homeobox genes. You can see how my name was closely connected with hers suddenly.” He also said that Hogan helped his career trajectory move up quickly.

On receiving the Viktor Hamburger Outstanding Educator Prize, Wright was “absolutely surprised” and humbly joked that he was waiting to hear that SDB had made a mistake. “I look at the people who have won it – Scott Gilbert, Michael Barresi, Gary Schoenwolf, and Ida Chow – and go, ‘of course they would win that!’”

“It means a lot to me that my efforts here [at Vanderbilt] are recognized as not just a regional center for growing developmental biology, but also my efforts in feeding the entire global community,” he stated. “I’m going to try to use [the award] as a way of spreading good influence. … It’s inserting me in a productive manner into activities in the SDB that I really believe in, [such as programs on how to apply to graduate school].”

On the same note, Wright hopes that in the future, SDB annual meetings will include more open-ended discussions, rather than a myriad presentations. He hopes to help bring together people at all levels to discuss the biggest questions lingering in developmental biology.

“One of my biggest questions is related to all of the omics and single-cell omics. How are we going to cross-modality integrate all of the information and understand, out of all of it, where the push points are in a gene regulatory network? If you push here, you might surprisingly get output there. How are we going to work through this complex stuff and break it down in a reductionist sense?”

He recognized that this would require immense collaboration. “That’s what I find is the biggest challenge over the next decade or so – to really understand how teams of scientists will become trusting of each other to really engage in deep discovery together,” he said.

Finally, Wright stressed that his path to success was not always straightforward, and it was studded with doubts. “There were many, many times where I thought my scientific career was going down, really badly,” he said. “I was just failing. I couldn’t make things work at the Ph.D. level and in my postdoc. I was really doubting myself, and I had no ‘Plan B’. … It’s worth people knowing that even senior, successful people have had to deal with these [thoughts and mental health challenges]. … It’s important to be able to open up about these sorts of things and admit it because the stigma is less if we all admit we are a spectrum of people.”

“Extreme success comes out of accepting challenge, finding inventive ways of getting over or around the hurdles, and thinking your way out of a problem.” 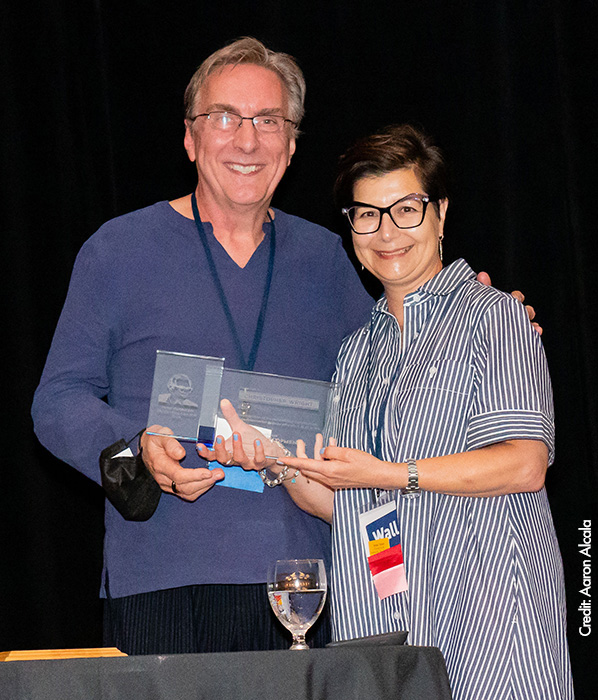